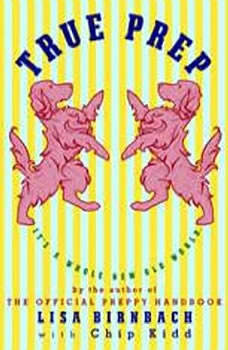 From Lisa Birnbach, the author of The Official Preppy Handbook—and designer Chip Kidd—comes a whole new take on the prep world that Birnbach turned into an international best-selling phenomenon thirty years ago.

True Prep is a contemporary look at how the old guard of natural-fiber-loving, dog-worshipping, G&T-soaked preppies adapt to the new order of things. Birnbach considers the prep attitude towards money (ambivalent), schools (good investment), wardrobe (now your clothes fit), work (some careers will never be prep), decorating (ask mummy), scandal (including rehab and prison), and food and drink (with some classic recipes for both). She also looks at weekends (and what to do to get asked back), entertaining, sports (including sailing and shopping), weddings, etiquette, the Internet and electronic gadgetry, political correctness, reality TV, and . . . polar fleece. And last but not least: a do-it-yourself eulogy.

With more than 200 original illustrations and photographs, True Prep promises to be a whole new, old sensation.