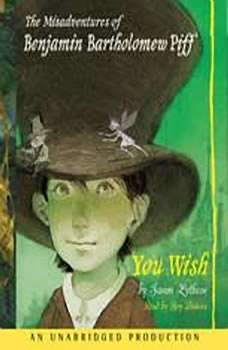 The Misadventures of Benjamin Bartholomew Piff

Orphaned Benjamin Bartholomew Piff closed his eyes, blew out the candle, and wished with all his might. Soon after, sirens wailed all over the Wishworks Factory–Ben had followed every rule of birthday wishing to a T and had made the most dangerous wish of all…a wish for unlimited wishes
Ben is delighted with his clever wish, until he learns that he has disrupted the fragile balance in the magical realm of wishes and curses. Before long, Ben has been recruited by the Wishworks factory president himself to fight the evil henchmen of the Curseworks Factory–giving new credence to the old adage: “Be careful what you wish for…”