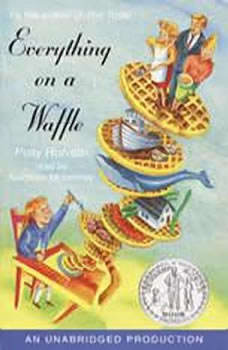 Everything on a Waffle

Primrose Squarp simply knows her parents did not perish at sea during a terrible storm, despite what the other residents of Coal Harbour believe. For all practical purposes, Primrose is an orphan, and there's no great clamoring of prospective adopters. After realizing the impracticality of continuing to pay Miss Perfidy (a mothball-scented elderly lady) an hourly wage to baby-sit her, the town council places her with Uncle Jack, who reluctantly takes her in. Primrose does warm up to him, but her true sanctuary is a local restaurant called The Girl on the Red Swing, where everything--including lasagna--is served on a waffle, and where the proprietor Miss Bowzer offers a willing ear.

Through a mixture of eccentric humor and probing philosophy, author Polly Horvath makes Primrose's search for peace and understanding a most memorable one.