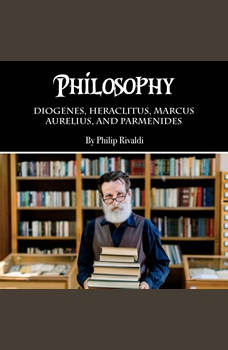 In this book, you will find information about five different philosophers, some of them well-known, others less. But all of them had a significant impact on the ancient world and how people thought, as well as some of our modern-day ideas.

Fourth is Diogenes of Sinope, a Greek philosopher who was known for holding a candlelight to people’s faces in search for honest people. His studies in Athens have left their mark.

These wise theorists can inspire you if you let them. Go ahead and start reading the E-Book or listening to the audiobook.

This book consists of two titles, which are the following: Book 1: In this convenient guide, several ancient, famous philosophers will be covered, so you may get a better understanding of the ancestors who have shaped our ideas and theories bef...

The philosophers from the east (China, other countries in Asia, etc.) have many things in common with the ancient philosophers in the west (Greece, Eurasia, etc.). But there are differences too. In this guide, we will highlight and compare some...

In this convenient guide, several ancient, famous philosophers will be covered, so you may get a better understanding of the ancestors who have shaped our ideas and theories before we were born.  Confucius has definitely left a mark on the...

This book focus on the relationship between the sequence of the creation cycle and the Egyptian ABGD alphabets; the principles and principals of Creation; the cosmic manifestation of The Egyptian Alphabets ; the three Primary Phases of the Creation ...