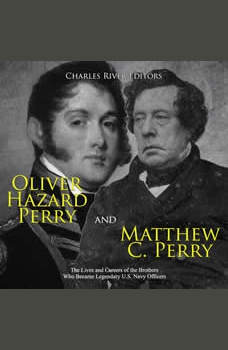 Oliver Hazard Perry and Matthew C. Perry: The Lives and Careers of the Brothers Who Became Legendary U.S. Navy Officers

Americans had few things to celebrate during the War of 1812, and fighting on the frontier against the British and their native allies didn’t go any better than the conflict did in other theaters, but one of the only major victories the Americans won came at the Battle of Lake Erie in September 1813. That action made Oliver Hazard Perry, a veteran of the Barbary Wars and commander of the USS Lawrence, a legend whose name has endured for over 200 years. Perry was so instrumental in the victory that British historian C.S. Forester noted “it was as fortunate for the Americans that the Lawrence still possessed a boat that would float, as it was that Perry was not hit." As one of the biggest naval battles of the war, the results meant that America maintained control of Lake Erie, an important location from which they could recover Detroit and be better positioned to confront the British and Shawnee leader Tecumseh’s confederacy. For his part, Perry would forever be remembered as the “Hero of Lake Erie,” even as he and compatriot Captain Jesse Elliot would feud over their respective actions during the battle for the rest of Perry’s life.

On July 8, 1853, U.S. Navy Commodore Matthew Perry led four American warships into Uraga Harbor near Edo (later renamed Tokyo), presenting the Japanese with a letter from President Millard Fillmore. The Japanese couldn’t know they were at the end of their long withdrawal from the rest of the world, but they were quite aware that the conditions in China and in Asia generally were being forced to change. Perry remains a fairly familiar name in America as a result of his time in Asia, but that legacy actually belies just how influential he was for the U.S. Navy back at home. Known as the “Father of the Steam Navy” in America, Perry not only modernized America’s naval forces, but literally wrote the book on it, helping put together doctrinaire curricula for the country’s future sailors.