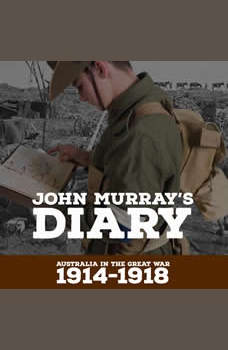 Discover the story of Australia in the Great War through the eyes and stories of John Murray – a would-be journalist, aspiring artist and young soldier. John’s dairies capture the history, events and experiences of Australians, as each instalment builds to tell the story of Australia’s journey from peacetime through to the war’s end. Share a young Australian’s hopes his insights; and his pain, as war changes the fabric of his world and his family. The diaries have been compiled through meticulous research and historically accurate accounts of this momentous period in world history.

John Murray’s Diary 1914-1918 is available in other formats, including audiobook and deluxe collectible diary. The collectible diary contains special inclusions such as maps, postcards, newspaper clippings and other authentic documents, as well as numerous Memory Pennies. The pennies are contemporary reproductions of vintage copper pennies, featuring memorable moments from the diary.