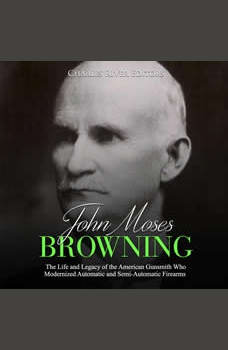 John Moses Browning: The Life and Legacy of the American Gunsmith Who Modernized Automatic and Semi-Automatic Firearms

By the late 19th century, the nature of war weaponry, new naval paradigms and the first imaginings of aviation as a primary component of battle required yet another leap in technology. One single artisan arose from among many talents to meet the new challenge at a high level, far from the prestigious pistol and rifle factories of Connecticut. John Moses Browning was raised in what was at the time the “Wild West” of the Utah Country. His educational upbringing was both sparse and basic, but through the impetus of his father’s gun-making business, he would become the greatest mind of the arms industry’s modern age. Where Colt labored over one solitary concept that eventually led him to the modern repeating revolver, Browning’s instinct proved able to visualize concepts far above his formal training and follow them through to a number of diverse and functional weapons. Although Winchester emerged into the greatest salesman of the modern repeating rifle and gathered early designers such as Benjamin Tyler Henry to his workshops, he was no inventor. Talents such as that of Browning were to be absorbed by the Winchester Repeating Arms Company in order to maintain an ongoing superiority in product lines and sales numbers.

The major weapons manufacturers soon realized that there was no talent equal to that of the Utah frontiersman, and in time he was employed by all the top gun-makers in the United States and Europe, including Fabrique Nationale in Belgium. There, he was granted well-deserved respect and the right to see his inventions find the light of day, sought after for so long. The breadth of Browning’s mechanical brilliance is evidenced by the reality that his designs from the pre-World War I era are still in production, and many are considered to be among the finest available models more than a century later.