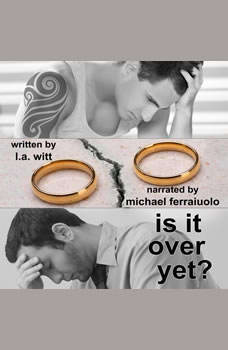 Is It Over Yet?

Rhys Powell and Derek Scott are divorcing. Mistakes have been made, lines have been crossed, and there’s no going back. Both men are exhausted and ready to move on.But their daughter is getting married soon. In the name of not putting a damper on her wedding, Derek and Rhys agree to keep the divorce on the down-low and show up as the happy couple everyone still believes they are.And between a roller coaster of a road trip and the love and joy surrounding the wedding… Derek and Rhys just might remember why they fell for each other in the first place.Are they only kidding themselves? Or can a rekindled spark really light the way to forgiveness?This novel is approximately 59,500 words long.