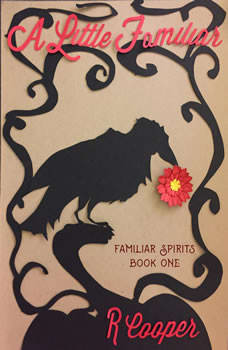 A powerful witch, Piotr Russell has resigned himself to loneliness, because ordinary humans can’t know what he is, and other witches are intimidated by his abilities. Generations of Russells have lived and died with only their familiars at their side. The presence of a friendly familiar is enough to keep even the loneliest witch sane, and yet Piotr deliberately hasn’t chosen one. He forces himself to keep busy instead, but the emptiness of his house haunts him even more the spirit of Great-Great-Aunt Elysia in the parlor. With Samhain and Halloween approaching, he’ll have much to do, and knowing that, his concerned coven seizes the chance to intervene and sends help to his door in the form of Bartleby Dorchester. The rarest of rare jewels, Bartleby is a human familiar: a witch with no magic of his own, and a desire to find a strong witch to help and serve. In particular, he desires to help and serve Piotr, and everything in Piotr wants to let him. Bartleby was meant to be his familiar; Piotr knows it as surely as he knows when it will rain or when the apples in his garden will ripen. But what Piotr wants from Bartleby, all he’s ever wanted, is for Bartleby to love him, something he thinks is impossible. Russells live and die unloved, and he won’t allow Bartleby to feel obligated to spend his life with him as his familiar if he could be happy in love with someone else. But Samhain is a time for change, when walls come down and borders grow thin, and Bartleby isn’t going to waste what might be his last chance to convince Piotr that they were meant to be. He might have no magic, but love is a power all its own.