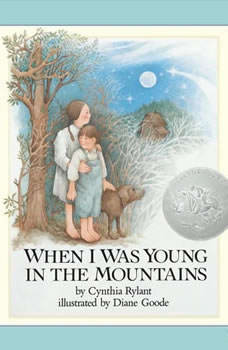 When I Was Young in the Mountains

"An evocative remembrance of the simple pleasures in country living; splashing in the swimming hole, taking baths in the kitchen, sharing family times, each is eloquently portrayed here in both the misty-hued scenes and in the poetic text."
-Association for Childhood Education International

The Eagle
by Cynthia Rylant

Newbery Medal and Boston Globe-Horn Book Award winner Cynthia Rylant creates an adorable family in The Lighthouse Family series chapter books. The mice children, Whistler and Lila, set out on an adventure into the mysterious forest. With a trusty co...

How much do you have to give up to find yourself? When Pete first sets eyes on the Man, he's convinced he's an ax murderer.  But at the revival meeting, Pete discovers that the Man is actually a savior of souls, and Pete has been waiting a...