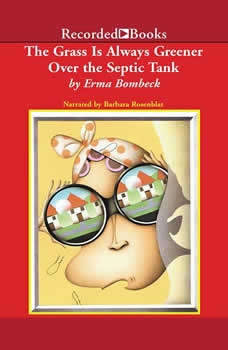 The Grass Is Always Greener Over the Septic Tank

Erma Bombeck's humorous insights about family life always tickle readers' funny bones. Her New York Times best-sellers have sold millions of copies to gleeful readers around the world. In The Grass Is Always Greener Over the Septic Tank, Bombeck joins the station wagon train to the suburbs. In new lands like the Suburbian Gems subdivision, settlers from the city brave endless cul-de-sacs and overly helpful insurance salesmen. Picture windows bring new meaning to the term 'neighborly'. A poorly timed trip to the restroom results in a promotion to Girl Scout Cookie Captain. And brave parents fight epic battles to get sex out of the schools and back into the gutters. With Barbara Rosenblat's perfect comic timing, the author of If Life Is a Bowl of Cherries--What Am I Doing in the Pits? (RB# 96171) and A Marriage Made in Heaven, or Too Tired for an Affair (RB# 94790) adds to her reputation as America's favorite funny lady.