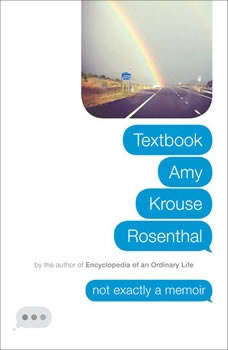 The bestselling author of Encyclopedia an Ordinary Life returns with a literary experience that is unprecedented, unforgettable, and explosively human.

Ten years after her beloved, groundbreaking Encyclopedia of an Ordinary Life, #1 New York Times bestselling author Amy Krouse Rosenthal delivers a book full of her distinct blend of nonlinear narrative, wistful reflections, and insightful wit. It is a mighty, life-affirming work that sheds light on all the ordinary and extraordinary ways we are connected.

Like she did with Encyclopedia of an Ordinary Life, Amy Krouse Rosenthal ingeniously adapts a standard format—a textbook, this time—to explore life’s lessons and experiences into a funny, wise, and poignant work of art. Not exactly a memoir, not just a collection of observations, Textbook Amy Krouse Rosenthal is a beautiful exploration into the many ways we are connected on this planet and speaks to the awe, bewilderment, and poignancy of being alive.


“…a groundbreaking new twist on the traditional literary experience… Textbook is a delightful collection of interesting scenarios that directly point to life lessons. Rosenthal manages to spotlight grand moments and everyday moments with equal curiosity, proving that it can be both a privilege — and petrifying — to peek into one’s humanity.”—Associated Press

“Rosenthal is a marvel… a talented storyteller with an experimental flair for formatting… This engaging, playful, and clever glimpse into one woman’s life offers lots of photographs, graphic illustrations, and diagrams, resulting in a book that will make readers smile as their notions of story delivery expand.” —Booklist