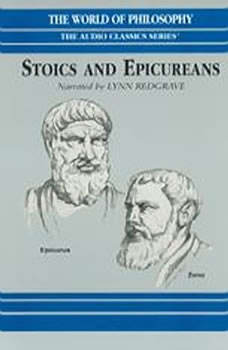 The Stoics and Epicureans date from the Hellenistic period (ca. 323 BC 31 BC), and both schools were heavily influenced by the philosophy of Socrates. The Epicurean mission was to live virtuously in a wicked world. They advocated a simple, quiet, reclusive, sensible life of moderation among friends, avoiding extravagant worldly attractions and bringing no trouble on others. A wise person was one who exhibits rational selfcontrol, subordinating excessive impulses and emotionladen desires to the law of reason. The Epicureans were suspicious of overly artful or sophisticated intellectual debates; they preferred ordinary language and relied only on sense impressions to establish what we perceive or know. The Epicureans sought a life of pleasure that is, minimal pain and maximum peace of mind by rejecting external goods and pursuing true and lasting internal qualities such as justice, honor, and wisdom. Epicurus said there are four basic truths: (1) there are no divine beings to threaten us; (2) there is no next life; (3) the little we actually need is easy to get; and (4) what makes us suffer is easy to put up with. For the Stoics, logos was seen as the rational order of all things, as reflected in the three areas of philosophy: logic (knowledge, grammar, rhetoric, semantics), physics (cosmology, biology, geography, causality, psychology, theology), and ethics (the goals, proper functions, moral responsibility, and virtue of human character). Human virtue was seen as the highest pattern of a life that accords with universal nature. The early Stoics (Zeno, Cleanthes, Chrysippus) were brilliant practitioners of paradox and dialectic (i.e. debates involving fine logical distinctions); their ideal was the sage, who could refute or trump all others. The later Stoics (Seneca, Epictetus, and Marcus Aurelius) emphasized the ideal of a model virtuous citizen, who fulfills his or her highest nature (which for humans is reason). We humans are, in turn, a part of universal reason the logos, the rational order of all things.