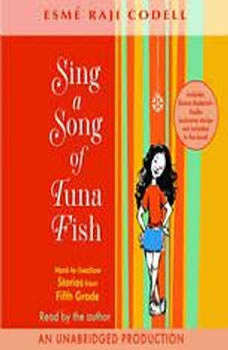 Sing a Song of Tuna Fish

Esmé tells us about the night she and her mother became "egg vigilantes" against an illegally parked car; her freewheeling first school, where kids sat on sofas instead of at desks and could choose disco dancing instead of math; her dangerous neighborhood, which her father made seem friendly and wondrous; the Passover dinner when she stole a matzoh right out from under a rabbi; the awe-inspiring, life-threatening Chicago snowstorms; and lessons about love from tea-reading gypsies and Popeye cartoons.

In stories that perfectly evoke the perspective of her ten-year-old self, author Esmé Raji Codell demonstrates her gift for making the ordinary extraordinary, and the unusual familiar. SING A SONG OF TUNA FISH is a memoir of a Chicago childhood; a tribute to the art of attention; and most of all, a joyful listening experience for kids and families.