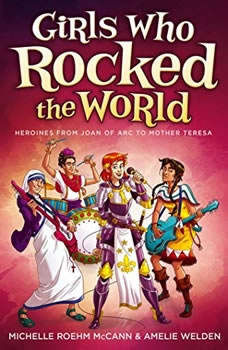 Girls Who Rocked the World: Heroines from Sacagawea to Sheryl Swoopes

If you made a list of people who rocked the world, how many girls would be on it? Author Amelie Welden was inspired to write this story when she learned of the many young women who made their mark on history before the age of 20. Cleopatra was only 18 when named queen of the Egyptian empire, and Victoria was only 19 when crowned Queen of England. Phillis Wheatley is credited with starting the African-American literary tradition, and jazz singer Bessie Smith was only nine when she made her stage debut. This book covers the best-known heroines as well as some you may never have heard of, like Mary Anning, who discovered a dinosaur fossil in 1809 at the age of 11 and went on to become one of the first professional female scientists. Kids will find that there are many ways to make a difference, and included with each story are statements from today's girls about how they plan to rock the world.