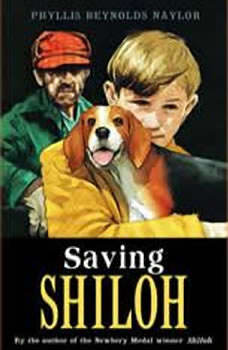 In Saving Shiloh, Phyllis Reynolds Naylor brings to a conclusion the trilogy begun with the Newbery Medal winner Shiloh and its sequel, Shiloh Season. Judd Travers is physically on the mend from the truck accident that nearly took his life in Shiloh Season. But is he healing inside too? Can Marty and his family and the community trust that Judd will not return to his evil ways? Marty's parents tell him that every person deserves a second chance. Most people in the surrounding community, however, are quick to assume the opposite and find ways to place Judd at the center of any trouble–even murder.

And then there's Marty, stuck right in the middle, wanting to believe in Judd, but afraid of anything that might place himself or his beloved dog, Shiloh, in jeopardy. Are his efforts to help Judd–and Judd's remaining dogs–worthwhile, or is Marty's friend David Howard right in seeing mounting evidence of the real trouble Judd is in? Finally something unexpected happens that puts Judd to the test–Judd and Shiloh, Marty and his sisters, the whole community, in fact.