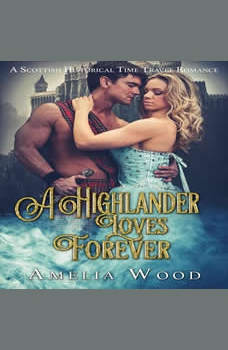 In the twelfth century Scotland, after the recent death of his father, Blane Cameron had just stepped up as Laird of one of the largest and most prosperous lands of the Highlands, but a woman from his past isn't ready to let him succeed. A witch, wielding the magic of the Sith, will stop at nothing to destroy the man who couldn't love her back.

Present day Jade had given up on men. Having not found even a spark of love, she's decided that the passion and magic everyone else seemed to find so easily was not for her. But when a haunting voice leads her into the past, she'll have more than her fair share of men to deal with, and she has more than a spark with the handsome but distrustful laird.

Blane doesn't trust the strange woman claiming to be from the future. His men are turning on each other just to be in her presence, and he knows that she is connected to the witch he hunts, but when he's near her, all he can think about is how it would feel to be in her arms.

Is it a spell bringing them together or is it true love? And will they be able to stop the witch in time before she destroys the Cameron clan forever?

Get ready to be immersed in a world full of magic and true passionate love. Love is timeless for a highlander and Blane is impossible not to fall for when it comes to a handsome highlander!