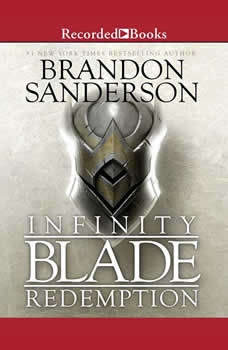 Long months have passed since Siris and the God King, enemies betrayedtogether, were left to rot in the prison at the Vault of Tears. Their true enemy -- the Worker of Secrets, creator of the Infinity Bladeitself -- now reigns.Upon finally obtaining freedom, Siris must unravel plots that seem to make no sense, lead a rebellion with no direction, and fight against the division within his very heart. The secrets unraveled will dig backward in time toward the origins of the deathless and the true nature of the world itself...From #1 bestselling author Brandon Sanderson and ChAIR entertainment, creators of the blockbuster Infinity Blade video game series, comes the second novel in the epic Infinity Blade saga. This latest tale delves deeper into the fantastical world of Infinity Blade, a world of mystery and intrigue where magic and technology are indistinguishable and even life and death are not as they seem.

American author, Brandon Sanderson, writes of epic fantasy and science fiction. His best known works include Cosmere, a fictional universe in which most of his novels are set. They include, the Mistborn series, and the Stormlight Archive, and also finishing The Wheel of Time, that was Robert Jordan's high fantasy novel (that he began writing before his untimely death). He also made popular the terms "hard and soft magic systems" in his Sanderson's Laws of Magic. The media company, DMG Entertainment has rights to the production movie of the Cosmere universe series.

Sanderson graduated from Brigham Young University. He began studies in biochemistry, to become a doctor, but after a two year break to do mission work for his church, he decided he wanted to write, and changed majors to English Literature. He took a night job at a local hotel in Provo, Utah while at BYU, so he could write while working. His roommate during that time was Ken Jennings, who ten years later had a 74-game winning streak on Jeopardy. After graduation from BYU, Sanderson married Emily Bushman, a fellow English major who later became his business manager.

Sanderson sold his first book to Moshe Feder at Tor in 2003. He had almost given up after submitting his manuscript a year and one half earlier. That first novel was Elantris, and over the next few years, Tor also published the Mistborn Trilogy, The Alloy of Law, Warbreaker, and The Way of Kings, the first in the ten-volume series, The Stormlight Archive. The second in that series was Words of Radiance. Other volumes continue in the works. Sanderson's acclaimed Infinity Blade: Awakening was an ebook best seller for Epic Games, accompanying their popular iOS video game series.

Sanderson, his wife, Emily, and their three sons live in American Fork, Utah.