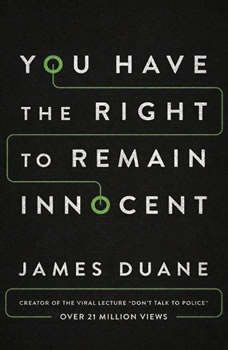 You Have the Right to Remain Innocent

An urgent, compact manifesto that will teach you how to protect your rights, your freedom, and your future when talking to police.Law professor James J. Duane became a viral sensation thanks to a 2008 lecture outlining the reasons why you should never agree to answer questions from the police—especially if you are innocent and wish to stay out of trouble with the law. In this timely, relevant, and pragmatic new book, he expands on that presentation, offering a vigorous defense of every citizen’s constitutionally protected right to avoid self-incrimination. Getting a lawyer is not only the best policy, Professor Duane argues, it’s also the advice law-enforcement professionals give their own kids.Using actual case histories of innocent men and women exonerated after decades in prison because of information they voluntarily gave to police, Professor Duane demonstrates the critical importance of a constitutional right not well or widely understood by the average American. Reflecting the most recent attitudes of the Supreme Court, Professor Duane argues that it is now even easier for police to use your own words against you. This lively and informative guide explains what everyone needs to know to protect themselves and those they love.