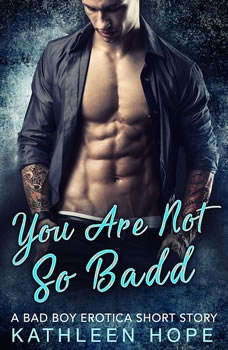 You Are Not So Badd: A Bad Boy Erotica Short Story

Tylan must have read my mind and he grabbed me by the hips and hauled me to the edge of the desk. One thrust had him deep inside me. I gripped his forearms and wrapped my legs around his waist as he began to thrust madly in and out of my body. My moans joined his as he moved against me, taking us both to that place lovers know. Suddenly, my body exploded into a million shimmering pieces and I cried out his name, pulling him down to me. His mouth closed over my breast and he drew hard on my flesh, pumping his hips for all he was worth. The sensations seemed to go on and on and I trembled in his arms. His mouth found mine and I kissed him back with the same...