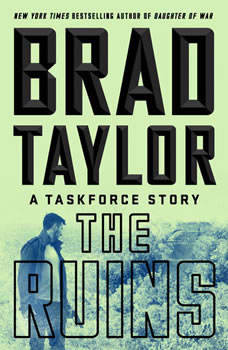 The Ruins: A Taskforce Story

Retired Special Forces officer Brad Taylor's thrilling new short story sets Pike Logan and Jennifer Cahill on a hunt for an ancient Mayan temple and reveals the origin of their archaeological company, the cover for their clandestine work with the Taskforce.

Deep in the Maya Biosphere Reserve, a huge protected tract of rain forest in northern Guatemala, lies the mythical Temple of Priests. Only one man knew of the temple's location, but he was killed before he could relay the coordinates. Now, newly reinstated Taskforce operator Pike Logan has the grid location of the ruins, and he's convinced Jennifer Cahill to travel to Guatemala in search of the Mayan temple her uncle died trying to find.

But Pike and Jennifer are not the only ones heading into the rain forest in search of hidden treasure. A Canadian mining company is determined to explore the Biosphere for rare earth metals, even if it means destroying the way of life for local villagers. When they learn that Pike and Jennifer's impending historical discovery might thwart their plans, it sets the newly minted team on a crash course with a group of men hellbent on getting their hands on the prize, no matter the cost.