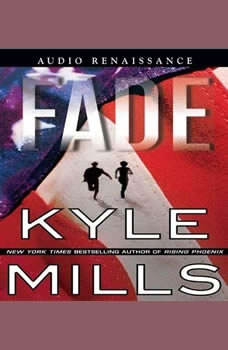 New York Times bestselling author Kyle Mills rewrites the rules for thrillers with Fade—a novel ripped from today's headlinesWelcome to the new war on terror. A secret wing of Homeland Security is recruiting agents to work undercover in the Middle East, and the director wants his second-in-command, Matt Egan, to bring aboard an old friend, Salam Al Fayed—better known as Fade. He's perfect: An ex-Navy Seal and the son of immigrants, he speaks flawless Arabic. Trouble is, he's "retired"; he was wounded in the line of duty, and the government refused to pay for the risky surgery that could have helped him. Now he's walking around with a bullet lodged near his spine, and he's not too fond of anyone in the government—least of all, his ex-best friend Matt Egan, whom he blames for his present condition. Against Egan's wishes, the director tries to "persuade" Fade to join the team. But Fade is prepared to fight back at any cost. The chase is on—will Matt be able to find his friend-turned-fugitive before Fade can take the ultimate revenge? Fade is a remarkable, take-no-prisoners program from an unparalleled writer at the height of his talents.

The Second Horseman
by Kyle Mills

Brandon Vale is a career thief, the best there is. Of course, he is serving out a prison term for a robbery gone bad—albeit one that he didn't commit. But then he is broken out of prison against his will by Richard Scanlon, the former FBI agen...