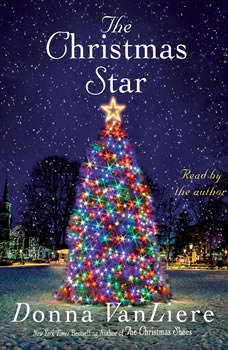 From the New York Times bestselling author of The Christmas Hope series comes another heartwarming, inspirational story for the holidays.Thirty-two-year-old Amy Denison volunteers at Glory’s Place, an after school program where she meets seven-year-old Maddie, a precocious young girl who has spent her childhood in foster care. Unbeknownst to Amy, Maddie is a mini-matchmaker, with her eye on just the right man for Amy at Grandon Elementary School, where she is a student. Amy is hesitant – she’s been hurt before, and isn’t sure she’s ready to lose her heart again – but an unexpected surprise makes her reconsider her lonely lifestyle.As Christmas nears and the town is blanketed in snow and beautiful decorations, Maddie and the charming staff at Glory’s Place help Amy to see that romance can be more than heartache and broken promises. In The Christmas Star, Donna VanLiere delivers yet another sweet, joyous story that is sure to capture listeners' hearts.