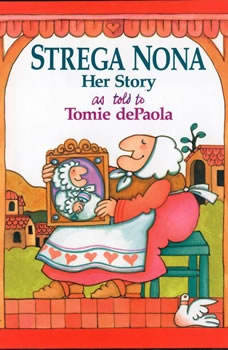 This is the beloved Strega Nona's own story, every detail just as she remembers it, from her childhood with Grandma Concetta, who trained young Nona and her best friend Amelia, to her early days in the little house on the hill and the happy moments when she met Big Anthony and Bambolona. It is the story of a most fascinating life that has influenced and delighted countless children and adults all over the world, and it all starts with the night Strega Nona was born, when the wind was blowing dark storm clouds across the hills . . .

It's no surprise that award-winning author and artist Tomie dePaola was Strega Nona's choice as her biographer and portraitist, for he has put into books many stories that she has shared with him over the years, including Strega Nona (a Caldecott Honor Book), Strega Nona Meets Her Match, Strega Nona Takes a Vacation, Strega Nona's Harvest, Strega Nona's Gift, and Strega Nona Does It Again. Strega Nona's reaction when shown this book was, "Bravissimo, mio caro Tomie!"