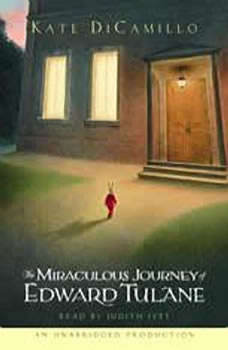 The Miraculous Journey of Edward Tulane

"Someone will come for you, but first you must open your heart. . . ."

Once, in a house on Egypt Street, there lived a china rabbit named Edward Tulane. The rabbit was very pleased with himself, and for good reason: he was owned by a girl named Abilene, who treated him with the utmost care and adored him completely.

And then, one day, he was lost.

Kate DiCamillo takes us on an extraordinary journey, from the depths of the ocean to the net of a fisherman, from the top of a garbage heap to the fireside of a hoboes' camp, from the bedside of an ailing child to the bustling streets of Memphis. And along the way, we are shown a true miracle -- that even a heart of the most breakable kind can learn to love, to lose, and to love again.

The Runaway Bunny it isn't. The narration by Judith Ivey is varied and enjoyable. The story is heart-wrenching, but not in a way I respect. It breaks your heart with the misery of virtually every person Edward encounters. It breaks your heart with the suicidal despair of this china rabbit. And then a happy ending is tacked on to the end. Perhaps I don't like such dark stories filled with emotional horror I know I don't like endings that simply don't work.