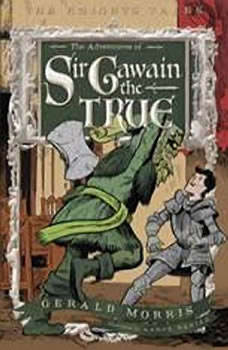 The Adventures of Sir Gawain the True: The Knights' Tales Book 3

Many years ago, the storytellers say, the great King Arthur brought justice to England with the help
of his gallant Knights of the Round Table.

King Arthur’s Knights were brave like Sir Lancelot the Great. They were smart like Sir Givret the Short. But they didn’t always act quite as . . . gallantly as a true knight should. Even King Arthur’s nephew, known at that time as Sir Gawain the Undefeated, was too full of himself to accept a token of thanks from a rescued princess! Someone, like a giant Green Knight, needed to teach Sir Gawain that courtesy and friendship are just as important as strength and courage. Come ride along on this exciting yearlong quest of Sir Gawain the Undefeated-but-who-may-learn-a-lesson-along-the-way, as only the acclaimed Arthurian author Gerald Morris can tell it.