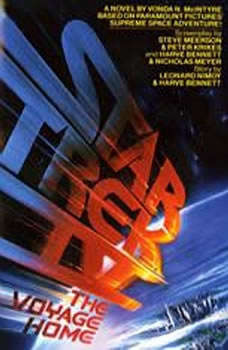 Admiral James T. Kirk is charged by the Klingon Empire for the comandeering of a Klingon starship. The Federation honors the Klingon demands for extradition, and Kirk and the crew of the Starship Enterprise are drawn back to Earth. But their trip is interrupted by the appearance of a mysterious, all-powerful alien space probe. Suddenly, Kirk, Spock, McCoy and the rest of the crew must journey back through time to twentieth-century Earth to solve the mystery of the probe.