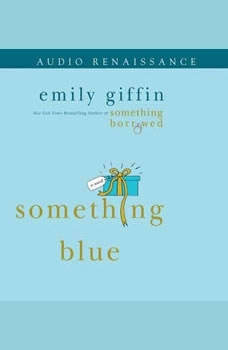 From the New York Times bestselling author of Something Borrowed comes a novel that shows how someone with a ‘perfect life' can lose it all—and then find everything.Darcy Rhone thought she had it all figured out: the more beautiful the girl, the more charmed her life. Never mind substance. Never mind playing by the rules. Never mind karma.But Darcy's neat, perfect world turns upside down when her best friend, Rachel, the plain-Jane "good girl," steals her fiance, while Darcy finds herself completely alone for the first time in her life…with a baby on the way.Darcy tries to recover, fleeing to her childhood friend living in London and resorting to her tried-and-true methods for getting what she wants. But as she attempts to recreate her glamorous life on a new continent, Darcy finds that her rules no longer apply. It is only then that Darcy can begin her journey toward self-awareness, forgiveness, and motherhood.Emily Giffin's Something Blue is a novel about one woman's surprising discoveries about the true meaning of friendship, love, and happily-ever-after. It's a novel for anyone who has ever, even secretly, wondered if the last thing you want is really the one thing you need.

American author, Emily Giffin, was born in the town of Naperville, Illinois, where she had an all-American life attending Naperville North High School. She had an interest in writing even back then. Giffin served as editor-in-chief of the school's newspaper. She received her degrees from Wake Forest and University of Virginia. She worked in litigation in Manhattan after she earned her law degree.

Writing was always the dream for Giffin. She worked as a lawyer to make a living and to pay off school loans. In her limited spare time, she worked on a manuscript, but when presented, it was rejected. Giffin was persistent though, moving to London and retiring from law to work full time on her writing. In London, she began her first well received novel, Something Borrowed, and thus began her accomplished writing career.

Critics loved her work, even comparing her to a modern day Jane Austin, and praised her story-telling skills. Her other works include: Something Blue; Baby Proof; Love the One You're With; Heart of the Matter; Where We Belong; The One and Only; First Comes Love; and All I Ever Wanted. Her books have been well received world-wide and translated into many languages. She and her family now reside in Atlanta.

This was an easy read. It was fantastic, but was a decent light read. There are times I felt the main character whined too much, but by the end I really liked and respcted the person she became.

I really enjoyed this. After Something Borrowed this was an excellent follow up in a different characters perspective!

This is my first book I have ready my Emily Griffin. I have not yet read 'Something Borrowed' but believe me, I will. At first, I did not like Darcy but by the end of the book, I fell in love with her. I cannot wait to read the first one!

It was so nice to finally enjoy a book from beginning to end after so many disappointing reads. This was just so fabulous! I didn't like Darcy at first, but she changed into a terrific person. You just grew to love her. This is my first book by Emily Giffin. I was disappointed to realize that there is another book before this. So, make sure to read Something Borrowed first. I'm going to go back and read the first book but wish I read it first to begin with. Emily Giffin is a terrific writer!