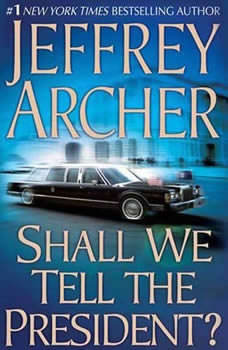 Shall We Tell the President?

Master storyteller Jeffrey Archer keeps the pace sizzling in this final installment in the Kane and Abel trilogy. Shall We Tell the President? is a daring political thriller where treason and betrayal threaten to topple an American dynastyAfter years of great sacrifice and deep personal tragedy, Florentyna Kane has finally become the first woman president in America. But on the very day that she is sworn into office, powerful forces are already in motion to take her life.The FBI investigates thousands of false threats every year. This time, a reliable source has tipped them off about an assassination attempt. One hour later, the informant and all but one of the investigating agents are dead. The lone survivor: FBI Special Agent Mark Andrews. Now, only he knows when the killers will strike. But how can he alone unravel a ruthless conspiracy—in less than one week? The race to save the first woman president begins now…Includes a bonus interview with the author

There are many who say that author Jeffrey Archer's life would make the subject of an excellent book. London born Archer, grew up in Somerset, whose father was a printer by trade, was educated in Wellington School and at Brasenose College, Oxford. He was a very accomplished athlete, becoming President of the University Athletics Club. That was the beginning of his elected positions in various political positions. After a bad investment left him on the verge of bankruptcy, he decided to try writing a novel to repay his debts to creditors.

For his first writing attempt, Archer had great success with "Not a Penny More, Not a Penny Less". The book sold to 17 countries and became a successful serial for BBC Radio 4, then televised in 1990. His second novel, "Shall We Tell the President", was a thriller about a plot to assassinate Edward Kennedy as though he became President. Several novels followed, each more successful than the others. He also mixed in some non-fiction and collections of short stories as well.

Archer is also a playwright with his first play being run at the Queen's Theatre in London's West End in 1987 for over 600 performances. He had a few plays that were quite successful, having played an acting role in one of the last to be performed.

In November of 1999, Archer was charged with perjury and conspiracy to pervert the course of justice, for which he served two years of a four-year sentence. He used that time to write a volume of documentaries about his experiences in the prison system. They were entitled.......Prison Diary: Volume I, Hell.......Volume II, Purgatory.........and, Volume III, Heaven. Archer is now published in 97 countries and more than 37 languages.......he is firmly established as an author of note. He has been married for 49 years to Dame Mary Archer DBE, and they have two sons and two grandsons. Their time is divided among their three homes in London, Cambridge, and Mallorca.