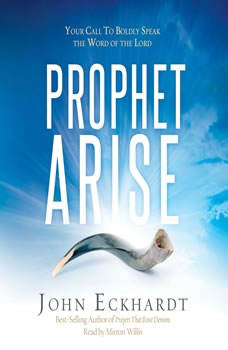 Prophet, Arise: Your Call to Boldly Speak the Word of the Lord

Something is stirring inside of you, but it has been silenced, gravely undermined, and misunderstood. You must believe that God has not forgotten you. He has not sidelined you. You are not crazy. Prophet, arise! Come out of your cave and be encouraged to speak forth the word of the Lord. God is calling you to be His Trumpet and to sound the alarm.

The body of Christ desperately needs prophets to awaken and go forth. Whether you have never spoken a prophetic word or you actively engage your gift, best-selling author John Eckhardt provides an unparalleled, inspiring teaching for you. He boldly reveals the characteristics of a prophet that may lie dormant in your life so God can launch you into your calling. You will learn:Unique characteristics of a prophetThe details of a prophet’s callWhat moves a prophet’s heart and stirs the anointingThe rewards a prophet brings to those who receive themHow to find healing and deliverance for the prophet who has been hurtAnd much more!

What Can I Do With My Guilt?
by R. C. Sproul

Dr. R.C. Sproul has often asked unbelievers who deny their need for a Savior, “What do you do with your guilt?” The question often breaks through sinful complacency, because feelings of guilt over sin are common. Unbelievers ma...

The Esther Anointing
by Michelle McClain-Walters

Be inspired by Esther, an incredible woman of God. Esther was willing to risk her life for the welfare of her people and the furthering of God’s plan. Strategically positioned by God in a place of influence, Esther is a powerful biblical examp...

What does real, saving faith actually entail? The New Testament repeatedly emphasizes the need for repentance from sin and accompanying good works as evidence of true belief. However, as theologian Wayne Grudem argues in this book, the teachings of ...

It should come as no surprise that misunderstandings about the gospel message and the nature of true conversion result in a problem with genuine assurance of salvation. A pseudo-gospel of easy believism has led many into careless presumption, and a ...

Jesus and the Jewish Roots of the Eucharist
by Brant Pitre

In recent years, Christians everywhere are rediscovering the Jewish roots of their faith. Every year at Easter time, many believers now celebrate Passover meals (known as Seders) seeking to understand exactly what happened at Jesus’ final Pass...

The Gospel's Power and Message
by Paul Washer

One of the greatest crimes of this generation of Christians is its neglect of the gospel, and it is from this neglect that all our other maladies spring forth. Absent from too many pulpits are the essential themes which make up the very core of the ...

What Is Faith?
by R. C. Sproul

The word faith is heard often these days, but it is given many different meanings. Sometimes it is used in the sense of trust. Other times, it has more to do with hope. Perhaps most often, it is used to mean belief in something apart from ...

God's Pursuit of Man
by A. W. Tozer

This book formerly titled The DIVINE CONQUEST, was written as a sequel to THE PURSUIT OF GOD. Admitting to having been forced by inward pressure and an unbearable burden to write it, Tozer's aim was to assure believers that if they want to know the ...