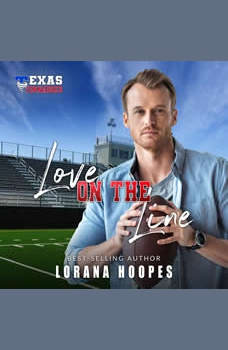 Love on the Line: A Christian Football Romance

A seemingly perfect quarterback. A designer with a celebrity crush. What happens when you stumble across something you were never supposed to find?

Blaine Hollis, quarterback of the Tornadoes, appears to have everything together, but no one knows the secret he's been hiding. He's enamored by Kenzi when he meets her at the center, so he lets her into his life - something he rarely does. But when she finds out his darkest secret, will he open his heart or turn her away?

Kenzi Lanham has long had a celebrity crush on Blaine Hollis, so when he asks her to redecorate his house, she his thrilled. Romantic sparks quickly fly between them, but when she finds an old clipping, he suddenly changes. Can she figure out what he's hiding before it tears them apart?

Another heart tugging, swoon worthy romance from best-selling author Lorana Hoopes. This second book in the Texas Tornadoes series will have you laughing, crying, and applauding at the grace of God. Grab your copy and prepare to see God shine today.