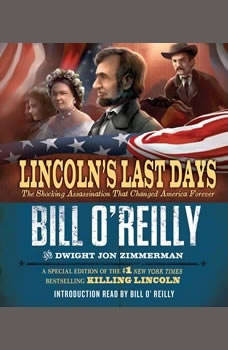 With more than 1.5 million copies sold, Killing Lincoln deftly recounts one of the most dramatic stories in American history—of how one gunshot changed the country forever. In Lincoln's Last Days, Bill O'Reilly masterfully adapts his historical thriller to appeal to a younger audience. Shorter text and abundant photographs make this is a useful, inviting, and accessible audiobook for younger listeners interested in American history and the Civil War. Both adults and children are sure to find this volume irresistible on its own, or as a compelling companion to Killing Lincoln.