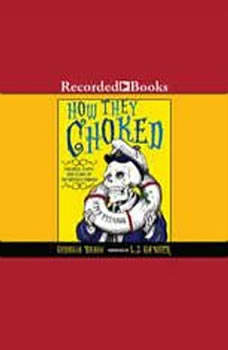 How They Choked: Failures, Flops, and Flaws of the Awfully Famous

Over the course of history, famous people made mistakes that were so monumental they could never escape them, no matter how brilliant their successes! Ferdinand Magellan is credited as the first man to sail around the world . . . but he only actually made it halfway. His terrible treatment of everyone he met cut his life journey short. Queen Isabella of Spain is remembered for financing Columbus's expeditions--and for creating the Spanish Inquisition. J. Bruce Ismay commissioned the unsinkable marvel of the sea, the "Titanic"--and then jumped the line of women and children to escape death on a lifeboat. Readers will be fascinated well past the final curtain and will empathize with the flawed humanity of these achievers. Famous successful "failures" include: Marco Polo - Queen Isabella of Spain - King Montezuma II - Anne Boleyn - Ferdinand Magellan - Isaac Newton - Benedict Arnold - George Armstrong Custer - Vincent Van Gogh - Susan B. Anthony - Thomas Alva Edison - J. Bruce Ismay - Amelia M. Earhart - Joseph Jefferson Jackson ("Shoeless Joe")