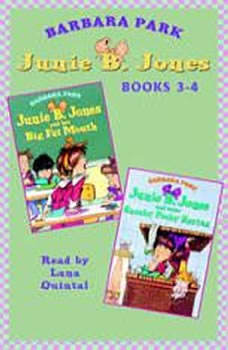 Junie B. Jones and Her Big Fat Mouth
Junie B.'s having a rough week. First she got punishment for shooting off her mouth in kindergarten. And now she's in big trouble again! 'Cause Monday is Job Day, and Junie B. told her class that she's got the bestest job of all. Only, what the heck is it?

Junie B. Jones and Some Sneaky Peeky Spying
Junie B. is the bestest spier in the whole world. That's 'cause she has sneaky feet. And her nose doesn't whistle when she breathes. But guess what? Junie B. might be real sneaky. And real peeky. But when she spies on Mrs., she could get into real trouble!