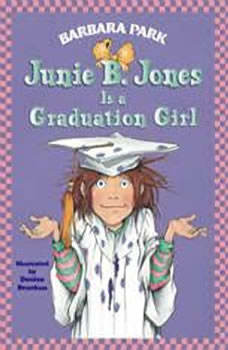 Barbara Park’s #1 New York Times bestselling chapter book series, Junie B. Jones, is a classroom favorite and has been keeping kids laughing—and reading—for more than twenty years. Over 60 million copies in print and now with a bright new look for a new generation!

Meet the World’s Funniest Kindergartner—Junie B. Jones! It’s kindergarten graduation, and Room Nine is getting bright white graduation gowns. Mrs. says to keep them in their boxes until the big day. But Junie B. Jones just can’t help herself. Then—uh-oh!—an accident happens! Will graduation be a spotty dotty disaster?

USA Today:
“Junie B. is the darling of the young-reader set.”

Kirkus Reviews:
“Junie’s swarms of young fans will continue to delight in her unique take on the world. . . . A hilarious, first-rate read-aloud.”

Time:
“Junie B. Jones is a feisty six-year-old with an endearing penchant for honesty.”