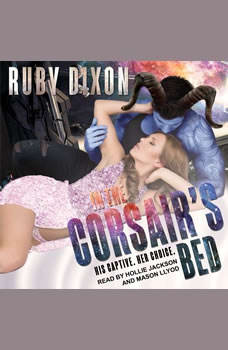 In The Corsair's Bed

As a pirate, I tend to hang out with unsavory outcasts at the edges of the known universe. I'm used to running into thieves, assassins, and fugitives. It shouldn't surprise me to see a forbidden human female for sale in the tunnels of the space station, but I hate it. When I see she's near death, I have to act. I buy her. She spits in my face. It's love at first sight. At least, it's love at first sight on my end. I know it can never be, though, because I'm an ugly beast of an alien to her. The enemy. If only she knew just how many laws I'd be willing to break for one taste of her lips . . . Contains mature themes.