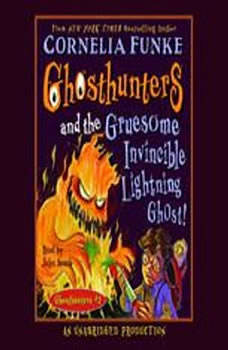 Can Tom and the team “dampen the spirit”–permanently!–of a fiery phantom, or are they about to get burned?
Boy hero Tom, Hugo the Averagely Spooky Ghost, and famed ghoul hunter Hetty Hyssop have formed an agency dedicated to dealing with difficult apparitions. No spook can defeat them–until their too close encounter with a Gruesome Invincible Lightning Ghost.
This superheated specter (or “GILIG,” in ghosthunter-speak) has taken over the penthouse suite of a beachfront hotel, where it’s passing its eternal vacation by turning guests into ghosts themselves!
Maybe Hugo’s slime can douse the flaming phantom–or maybe the ghosthunters’ plan is doomed to go up in smoke. . . . Get scared silly!