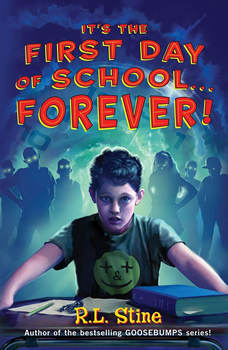 It's the First Day of School...Forever!

On the first day of school, Artie falls out of his bed and hits his head. Hard. He tells his mom he's dizzy and she says:

"You're just worried about your first day in a new school."

At breakfast, his little brother, Eddie, splashes syrup in his hair, and there's no time to wash it. Artie has to go to school with syrup-hair. And then, on the way there, he gets splashed by a puddle that makes him look like he wet his pants. It's not just the first day of school; it's the worst day of school.

On the second day of school, Artie falls out of bed and hits his head. Hard. He tells his mom he's dizzy and she says:

"You're just worried about your first day in a new school."

Huh? Today is just like the day before. Can Artie find a way to change it, before it's the first day of school…forever?