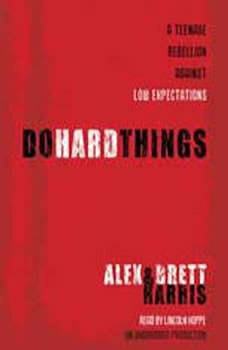 Do Hard Things: A Teenage Rebellion Against Low Expectations

A generation stands on the brink of a "rebelution."

Do Hard Things is the Harris twins' revolutionary message in its purest and most compelling form, giving readers a tangible glimpse of what is possible for teens who actively resist cultural lies that limit their potential.

Combating the idea of adolescence as a vacation from responsibility, the authors weave together biblical insights, history, and modern examples to redefine the teen years as the launching pad of life.  Then they map out five powerful ways teens can respond for personal and social change.

Written by teens for teens, Do Hard Things is packed with humorous personal anecdotes, practical examples, and stories of real-life rebelutionaries in action. This rallying cry from the heart of an already-happening teen revolution challenges a generation to lay claim to a brighter future, starting today.

Now includes:
-- A new introduction from the authors, “Looking Back, Looking Ahead”
-- Questions (and Stories) To Get You Started
-- A list of 100 Hard Things to help inspire you
-- A study guide for personal or group use

You want to do hard things.But you don’t know where to start. You are changing the world around you. But you are tired and burned out.  You feel called to do the extraordinary for God.But you feel stuck in the ordinary. Do Hard ...

You may think you know everything about multiplatform entertainer Matthew Espinosa—but he’s here to tell you so much more in his debut book.You know Matthew is burning up the internet with more than 18 million fans across YouTube, Vine,...