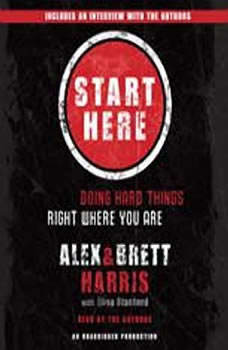 Start Here: Doing Hard Things Right Where You Are

You want to do hard things.
But you don’t know where to start.

You are changing the world around you.
But you are tired and burned out.

You feel called to do the extraordinary for God.
But you feel stuck in the ordinary.

Do Hard Things inspired thousands of young people around the world to make the most of the teen years. Now Alex and Brett Harris are back and ready to tackle the questions that Do Hard Things inspired: How do I get started? What do I do when I get discouraged? What’s the best way to inspire others? Filled with stories and insights from Alex, Brett, and other real-life rebelutionaries, Start Here is a powerful and practical guide to doing hard things, right where you are.

Are you ready to take the next step and blast past mediocrity for the glory of God?

When Kari Kampakis wrote a blog post titled "10 Truths Young Girls Should Know," the post went viral and was shared 74,000 times on Facebook and pinned 20,000 times on Pinterest. Obviously her message strikes a chord. This nonfiction book for teen a...

You may think you know everything about multiplatform entertainer Matthew Espinosa—but he’s here to tell you so much more in his debut book.You know Matthew is burning up the internet with more than 18 million fans across YouTube, Vine,...