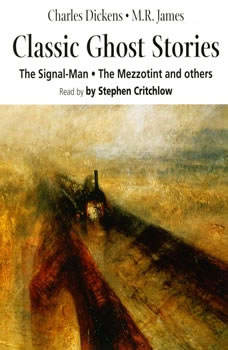 These stories are designed to engender a chill in the listener which is not just due to the season. Stephen Critchlow, a characterful actor, is a collector of ghost stories and relishes putting across those slightly odd moments when things don’t just seem to follow the normal process. Charles Dickens was chilling enough in his novels – one only has to remember the entry of Magwitch in Great Expectations! – but as a writer set deeply in the Victorian era and unashamedly a lover of the melodramatic, it comes as no surprise that one of the greatest classics of the genre was The Signalman. As a medieval scholar of a later period (1862–1936) M. R. James had a very different temperament but produced a string of classic ghost stories, of which The Mezzotint is one of the best known.