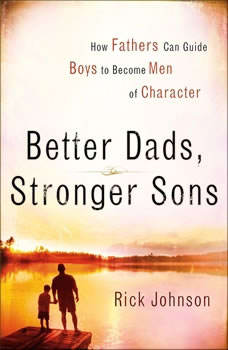 The relationship between a father and a son is like none other. Dads have a God-given role to protect and provide for their families, always striving to teach their sons the life skills they'll need to grow into honorable men. But many dads struggle with feelings of inadequacy regarding their fathering abilities. They want to be better dads.

Rick Johnson can show them how. In this insightful and practical book, Johnson shows how fathers can be equipped and inspired to be positive role models for their sons. He stresses the significance of male bonding, discipline, and spiritual leadership; discusses important topics such as sexual purity, respect, and self-discipline; and reveals the top ten mistakes to avoid as a father.

From commitment and courage to honesty and humility, Better Dads, Stronger Sons helps men strive to be the dads God designed them to be--so their sons can grow to be everything they are meant to be.

Do your kids think that clean, folded clothes magically appear in their drawers? Do they roll their eyes when you suggest they clean the bathroom? Do you think it's your job to pave their road to success? As parents, so often we hover, race in to sa...

The Devil in Pew Number Seven
by Rebecca Nichols Alonzo

Rebecca never felt safe as a child. In 1969, her father, Robert Nichols, moved to Sellerstown, North Carolina, to serve as a pastor. There he found a small community eager to welcome him—with one exception. Glaring at him from pew number seven...

Give Them Grace
by Elyse M. Fitzpatrick

A guide to help Christians parent their children with grace and an emphasis on the cross. How are parents to raise children so they don't become Pharisees (legalists) or prodigals (rebels)? It's all about grace-filled, gospel-driven parenting, say...