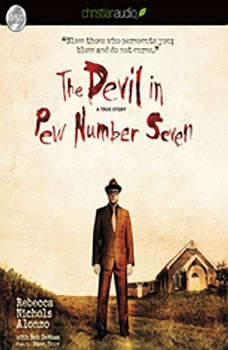 The Devil in Pew Number Seven: A True Story

Rebecca never felt safe as a child. In 1969, her father, Robert Nichols, moved to Sellerstown, North Carolina, to serve as a pastor. There he found a small community eager to welcome him—with one exception. Glaring at him from pew number seven was a man obsessed with controlling the church. Determined to get rid of anyone who stood in his way, he unleashed a plan of terror that was more devastating and violent than the Nichols family could have ever imagined. Refusing to be driven away by acts of intimidation, Rebecca’s father stood his ground until one night when an armed man walked into the family’s kitchen . . . and Rebecca’s life was shattered. If anyone had a reason to harbor hatred and seek personal revenge, it would be Rebecca. Yet The Devil in Pew Number Seven tells a different story. It is the amazing true saga of relentless persecution, one family’s faith and courage in the face of it, and a daughter whose parents taught her the power of forgiveness.

Have You Ever Given Your Best and Gotten the Worst in Return?. The wounds inflicted by an "unsafe" person can go deep. If youa€™ve ever been in a relationship where you were used, abused, or abandoned, then Safe People is for you. It will...

Do your kids think that clean, folded clothes magically appear in their drawers? Do they roll their eyes when you suggest they clean the bathroom? Do you think it's your job to pave their road to success? As parents, so often we hover, race in to sa...

The relationship between a father and a son is like none other. Dads have a God-given role to protect and provide for their families, always striving to teach their sons the life skills they'll need to grow into honorable men. But many dads struggle...