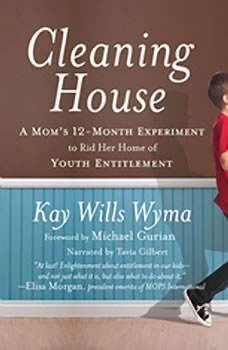 Cleaning House: A Mom's Twelve-Month Experiment to Rid Her Home of Youth Entitlement

Do your kids think that clean, folded clothes magically appear in their drawers? Do they roll their eyes when you suggest they clean the bathroom? Do you think it's your job to pave their road to success? As parents, so often we hover, race in to save, and do everything we can for our kids--unintentionally reinforcing their belief that the world revolves around them.

When Kay Wyma realized that an attitude of entitlement had crept into her home, this mother of five got some attitude of her own. Cleaning House is her account of a year-long campaign to introduce her kids to basic life skills. From making beds to grocery shopping to refinishing a deck chair, the Wyma family experienced for themselves the ways meaningful work can transform self-absorption into earned self-confidence and concern for others.

With irresistible humor and refreshing insights, Kay candidly details the ups and downs of removing her own kids from the center of the universe. The changes that take place in her household will inspire you to launch your own campaign against youth entitlement. As Kay says, "Here's to seeing what can happen when we tell our kids, 'I believe in you, and I'm going to prove it by putting you to work.'"

The Devil in Pew Number Seven
by Rebecca Nichols Alonzo

Rebecca never felt safe as a child. In 1969, her father, Robert Nichols, moved to Sellerstown, North Carolina, to serve as a pastor. There he found a small community eager to welcome him—with one exception. Glaring at him from pew number seven...

The relationship between a father and a son is like none other. Dads have a God-given role to protect and provide for their families, always striving to teach their sons the life skills they'll need to grow into honorable men. But many dads struggle...

Have You Ever Given Your Best and Gotten the Worst in Return?. The wounds inflicted by an "unsafe" person can go deep. If youa€™ve ever been in a relationship where you were used, abused, or abandoned, then Safe People is for you. It will...