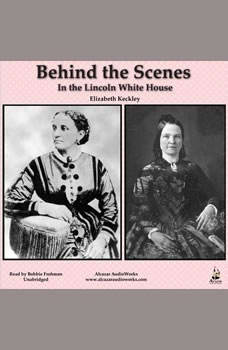 Behind the Scenes in the Lincoln White House: Thirty Years a Slave and Four Years in the White House

An autobiographical narrative, Behind the Scenes in the Lincoln White House traces Elizabeth Keckley's life from her enslavement in Virginia and North Carolina to her time as seamstress to Mary Todd Lincoln in the White House during Abraham Lincoln's administration. It was quite controversial at the time of its release-an uncompromising work that transgressed Victorian boundaries between public and private life, and lines of race, gender, and society.

If you truly want to know a historic character's makeup, warts and all, there's nothing like a sneak peek from a houshold staff member's point of view. This memoir relates the observations of Mrs. Lincoln's personal dressmaker, formerly a slave in a southern household. Mrs. Lincoln disliked, and was suspicious of, most of the Cabinet members' wives. It is not surprising, then, that she turned to the warmth and common sense of a woman who was not her social peer. Small insights into the Lincoln family make this book a must-read for readers seeking additional information about this remarkable time in our nation's history. 7/16/07 Vicki Wood Chulock