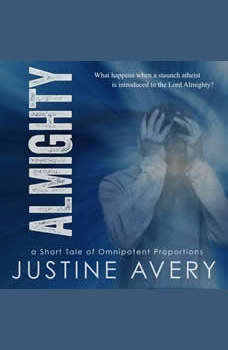 When a staunch atheist is introduced to the Lord Almighty in the most casual—and childish—way, it's not the end of the world. It's a Tuesday.

Bradley Michaels is just another man ending just another workday at just another job. He can list the usual complaints, can point his finger at the usual causes, and he can go about his routine as if one day is absolutely no different from the next.

Until God himself just shows up uninvited and shakes up Bradley's entire existence by flaunting his own.

It's not fair, but Bradley never claimed life is. And he tries to handle the new, omniscient presence in his head with calm attention and cool collectedness.

But God happens to be a bit of a kid. He likes to joke, to prod, to stir things up. And what God sets his mind to, God succeeds at.

Just as Bradley believes he's got life all figured out, God has to throw a wrench into it.

But not at all in the way that Bradley—or you—can expect.

Just when you think life is going according to plan, you find out your plan sucks. And it's time for a new one.