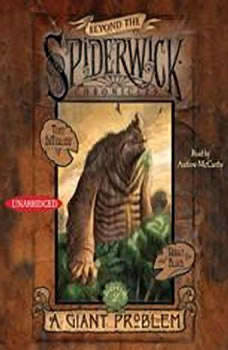 Nick and Laurie have a giant problem and it's a lot bigger than they originally thought.  When Taloa sent them off to find her sisters, they discovered a single fire breathing giant, but as it turns out, that one giant is just the tip of the proverbial iceberg.  According to NoSeeum Jack, the blind giant killer who helped Nick, Laurie, and Jared dispatch the original giant, there are hundreds, possibly even thousands of giants underneath the surface waiting to wake up.  And since Taloa refuses to give any assistance until her sisters are located, the kids turn to a kingdom of merfolk for help.  As is the way of the fey, the merfolk send the kids on a quest--to find a sea creature they'd never seen--before they'll even consider helping.  They then capture Julian and leave him stranded on a distant sand bar that's too far for him to swim to shore from.  He'll drown if they're not back from the quest by high tide.  Between Julian's hysterical girlfriend, Noseeum's ruthless hunting of the giants, and trying to figure out the quest, the kids have their hands full.  But even more so when they find a creature the mermaids have never seen.  Still, the mermaids refuse to help stating that what the giants are about to do is part of a natural cycle.

The Wyrm King
by Holly Black

In the final installment of Beyond the Spiderwick Chronicles, Nick and Laurie had thought they solved their giant problems when they drove all the giants into the sea. But now, the Grace kids have come back to tell them they may have more trouble co...

Classic stories and dazzling illustrations of gods, goddesses, heroes and monsters come to life in a stunning tableau of Norse myths, including those of the thunder god Thor, the one-eyed god and Allfather Odin, and the trickster god Loki. The lyric...

Ragnar Lothbrok: The Tale of a Viking Warrior King delves into the mystery surrounding the Viking warrior who conquered European nations and became a king in his own right. Over nine centuries after the death of this great warrior, ancient poem...

Tinsey Clover is smart. She’s brave. Also, she can’t carry a tune to save her life. Oh yeah, plus she's an elf the size of a chipmunk. When her bizarre magical power grows in and makes her feel like a total outsider in her own village, T...

Jack the Lumberjack finds a hidden object....When the forest is burnt and Jack has to look for a new way to generate an income, he finds himself wrestling with the forces of nature and the powers of a mysterious object. He uses the tool to his advan...

The Nixie's Song
by Holly Black

The Spiderwick Chronicles leave the old-fashioned charm of New England far behind and head south for some fiendish faerie fun in the hot Florida sun. Eleven-year-old Nicholas Vargas only thinks his life has been turned upside down after his develope...