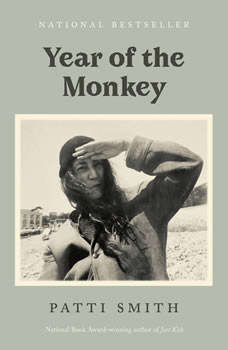 Year of the Monkey

From the National Book Award-winning author of Just Kids and M Train, a profound, beautifully realized memoir in which dreams and reality are vividly woven into a tapestry of one transformative year.

Following a run of New Year's concerts at San Francisco's legendary Fillmore, Patti Smith finds herself tramping the coast of Santa Cruz, about to embark on a year of solitary wandering. Unfettered by logic or time, she draws us into her private wonderland with no design, yet heeding signs--including a talking sign that looms above her, prodding and sparring like the Cheshire Cat. In February, a surreal lunar year begins, bringing with it unexpected turns, heightened mischief, and inescapable sorrow. In a stranger's words, "Anything is possible: after all, it's the Year of the Monkey." For Smith--inveterately curious, always exploring, tracking thoughts, writing--the year evolves as one of reckoning with the changes in life's gyre: with loss, aging, and a dramatic shift in the political landscape of America.

Smith melds the western landscape with her own dreamscape. Taking us from California to the Arizona desert; to a Kentucky farm as the amanuensis of a friend in crisis; to the hospital room of a valued mentor; and by turns to remembered and imagined places, this haunting memoir blends fact and fiction with poetic mastery. The unexpected happens; grief and disillusionment set in. But as Smith heads toward a new decade in her own life, she offers this balm to the reader: her wisdom, wit, gimlet eye, and above all, a rugged hope for a better world.

Riveting, elegant, often humorous, Year of the Monkey is a moving and original work, a touchstone for our turbulent times.

A lifetime of letters, collected for the first time, from the legendary musician and songwriter. John Lennon was one of the greatest songwriters the world has ever known, creator of "Help!", "Come Together", "Lucy in the Sky with Diamonds", "Strawb...

Back porch swamp blues music stomps you into the Mekong River as Pete tells the controversial story of how the airing of this song, protesting the war in Vietnam, contributed to the Smother's Brothers' show being cancelled.This single is part of th...

The Way Of The Zen Cowboy: Fireside Stories From A Globetrotting Rhythmatist
by Barrett Martin

The Way Of The Zen Cowboy is a collection of 35 short stories from Grammy-winning musician, writer, and ethnomusicologist Barrett Martin. These stories are based on his personal experiences around the world, as well as wisdom stories heard from Indi...

Between Heaven and the Real World
by Steven Curtis Chapman

For decades, Steven Curtis Chapman's music and message have brought hope and inspiration to millions around the world. Now, for the first time, Steven openly shares the experiences that have shaped him, his faith, and his music in a life that ha...

Ricky Martin: Red-Hot and on the Rise!
by Kathleen Tracy

Fresh from his Grammy win for best Latin pop album, this sizzling Latin heartthrob is on the verge crossing over into mainstream music superstardom. This timely profile of Martin's life starts with his childhood in Puerto Rico and chronicles his ris...

Will Ackerman and Heidi Breyer's composition sets the stage as Pete Seeger recites Jeff Haynes' poem about the Underground Railroad. This single is part of the ongoing project called PETE SEEGER: THE STORM KING - an audio collection presenting see...

African music sets the stage as Pete describes his travels around the world and the complex communication that takes place in a small African village using the talking drum. This single is part of the ongoing project called PETE SEEGER: THE STORM ...

If you live for people's acceptance, you'll die from their rejection. Two-time Grammy winning rap artist, Lecrae, learned this lesson through more than his share of adversity—childhood abuse, drugs and alcoholism, a stint in rehab...