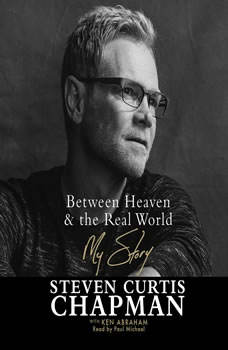 Between Heaven and the Real World: My Story

For decades, Steven Curtis Chapman's music and message have brought hope and inspiration to millions around the world. Now, for the first time, Steven openly shares the experiences that have shaped him, his faith, and his music in a life that has included incredible highs and faith-shaking lows.

Readers will be captivated by this exclusive look into Steven's childhood and challenging family dynamic growing up, how that led to music and early days on the road, his wild ride to the top of the charts, his relationship with wife Mary Beth, and the growth of their family through births and adoptions. In addition to inside stories from his days of youth to his notable career, including the background to some of his best-loved songs, readers will walk with Steven down the devastating road of loss after the tragic death of five-year-old daughter Maria. And they'll experience his return to the stage after doubting he could ever sing again.

Poignant, gut-wrenchingly honest, yet always hopeful, Steven offers no sugary solutions to life's toughest questions. Yet out of the brokenness, he continues to trust God to one day fix what is unfixable in this life. This backstage look at the down-to-earth superstar they've come to love will touch fans' lives and fill their hearts with hope. Includes black-and-white photos throughout.