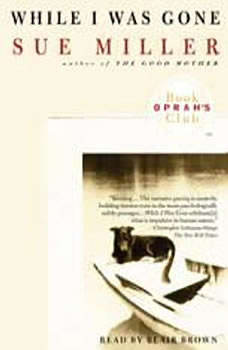 While I Was Gone

A decade ago she put a face on every mother's worst nightmare with her phenomenal best-seller The Good Mother. Now, Sue Miller delivers a spellbinding novel of love and betrayal that explores what it means to be a good wife.

In the summer of 1968, Jo Becker ran out on the marriage and the life her parents wanted for her, and escaped--for one beautiful, idyllic year--into a life that was bohemian and romantic, living under an assumed name in a rambling group house in Cambridge. It was a time of limitless possibility, but it ended in a single instant when Jo returned home one night to find her best friend lying dead in a pool of blood on the living room floor.

Now Jo has everything she's ever wanted: a veterinary practice she loves, a devoted husband, three grown daughters, a beautiful Massachusetts farmhouse. And if occasionally she feels a stranger to herself and wonders what happened to the freedom she once felt, or how she came to be the wife, mother, and doctor her neighbors know and trust--if at times she feels as if her whole life is vanishing behind her as she's living it--she need only look at her daughters or her husband, Daniel, to recall the satisfactions of family and community and marriage.

But when an old housemate settles in her small town, the fabric of Jo's life begins to unravel: seduced again by the enticing possibility of another self and another life, she begins a dangerous flirtation that returns her to the darkest moment of her past and imperils all she loves.

While I Was Gone is an exquisitely suspenseful novel about how quickly and casually a marriage can be destroyed, how a good wife can find herself placing all she holds dear at risk. In expert strokes, Sue Miller captures the precariousness of even the strongest ties, the ease with which we abandon each other, and our need to be forgiven. An extraordinary book, her best, from a beloved American writer.

"When I was little I would think of ways to kill my daddy. I would figure out this or that way and run it down through my head until it got easy."So begins the tale of Ellen Foster, the brave and engaging heroine of Kaye Gibbons's first novel, which...